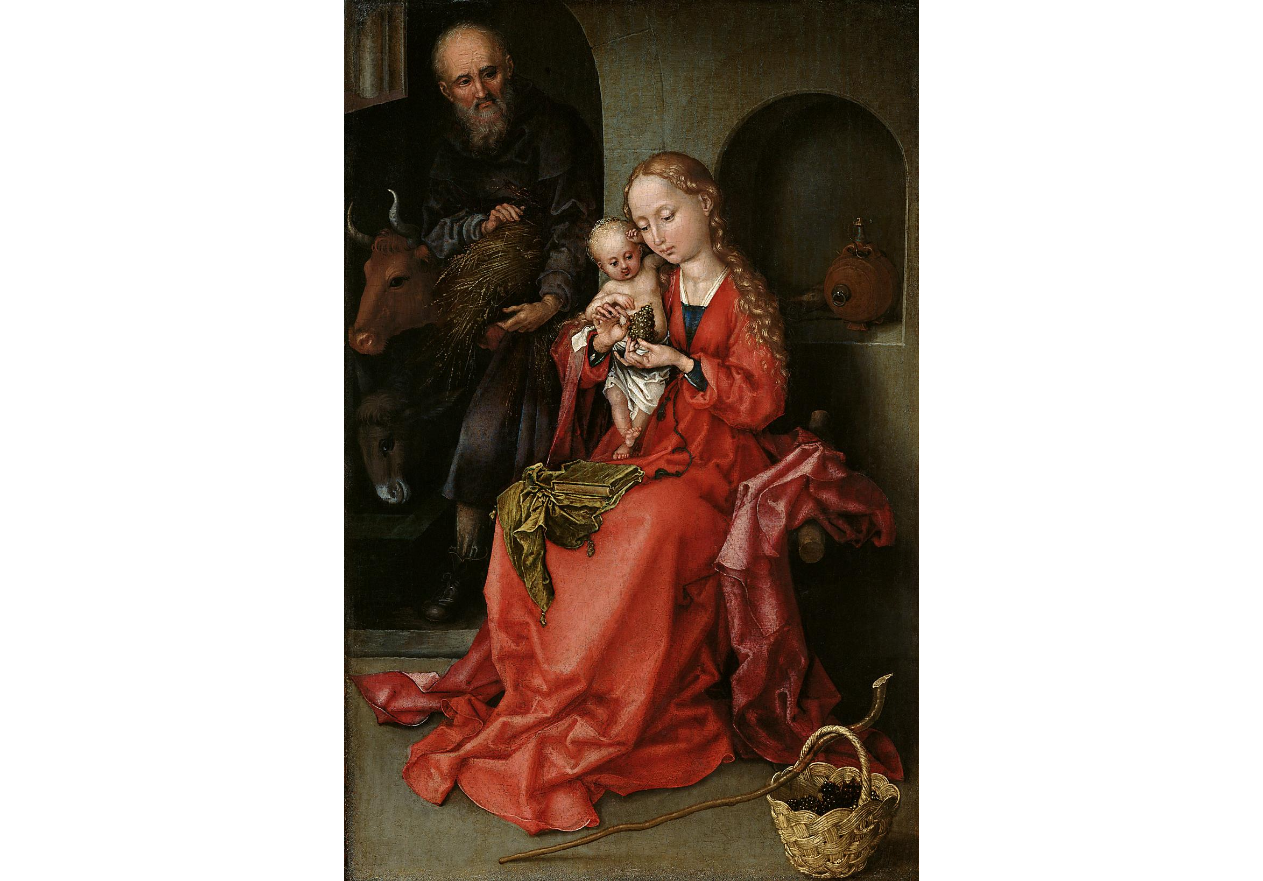 Martin Schongauer is most famous for his work as a copperplate engraver. He produced around 130 engravings, and the fame of his works, while he was still alive, was such that a famous painter and engraver like Albrecht Durer decided to travel from his native Nuremberg to Colmar just to meet the artist who had inspired him so much. Nevertheless, as there was no WhatsApp or TV at the time, it was only when he arrived in Colmar that he learned that Schongauer had been dead for several months.

Few of his paintings have survived, and this one stands out for its small size, which suggests that it was destined for a private home, probably for the devotion of a bourgeois family from Colmar or the surrounding area.

The scene is beautiful in its simplicity and essentiality. In the foreground we can see Mary holding Jesus in her arms. Both are concentrated on the bunch of grapes that the mother is holding in her hand. She is picking a grape, so that the little one can taste its flavour. The bunch has been picked along with others that are in the beautiful basket in the bottom right corner. The house is poor but dignified, directly connected to the stable where a donkey and an ox can be seen, the same animals that according to tradition warmed the newborn Jesus in Bethlehem. Joseph is coming out of the stable carrying a sheaf of wheat and looks with satisfaction at his family. Of course, the Eucharistic reference that grapes and wheat represent cannot be overlooked. It is unusual that it is the father and mother of Jesus who hold in their hands the double sign of Jesus’ presence and offering (“Take it, this is my body […] This is my blood, the blood of the covenant, poured out for many” Mk 14:22b-24) as if to signify their important role in the plan of salvation.

In this small panel, we cannot fail to notice many small details that reveal, on the one hand, the great skill of the painter and, on the other, the abundance of meaning that the scene offers us: the elegance of the folds of Mary’s red dress, the book resting on her knees, the liveliness of Jesus, as can be seen in his right foot and left hand, the subtle depiction of Mary’s hair or Joseph’s beard, the brilliance of the jewel-like colours, the interweaving of the basket made of rope, and the stick, which is actually a branch, perhaps from a beech tree, the same wood used by the Rhineland painter for this panel.

Let us contemplate this small but ‘great’ painting; let us allow ourselves to be enveloped by the simplicity of the life of the Family of Nazareth: to it we entrust our families!

“The greatness of Saint Joseph is that he was the spouse of Mary and the father of Jesus. In this way, he placed himself, in the words of Saint John Chrysostom, ‘at the service of the entire plan of salvation.’

Saint Paul VI pointed out that Joseph concretely expressed his fatherhood ‘by making his life a sacrificial service to the mystery of the incarnation and its redemptive purpose. He employed his legal authority over the Holy Family to devote himself completely to them in his life and work. He turned his human vocation to domestic love into a superhuman oblation of himself, his heart and all his abilities, a love placed at the service of the Messiah who was growing to maturity in his home’.” 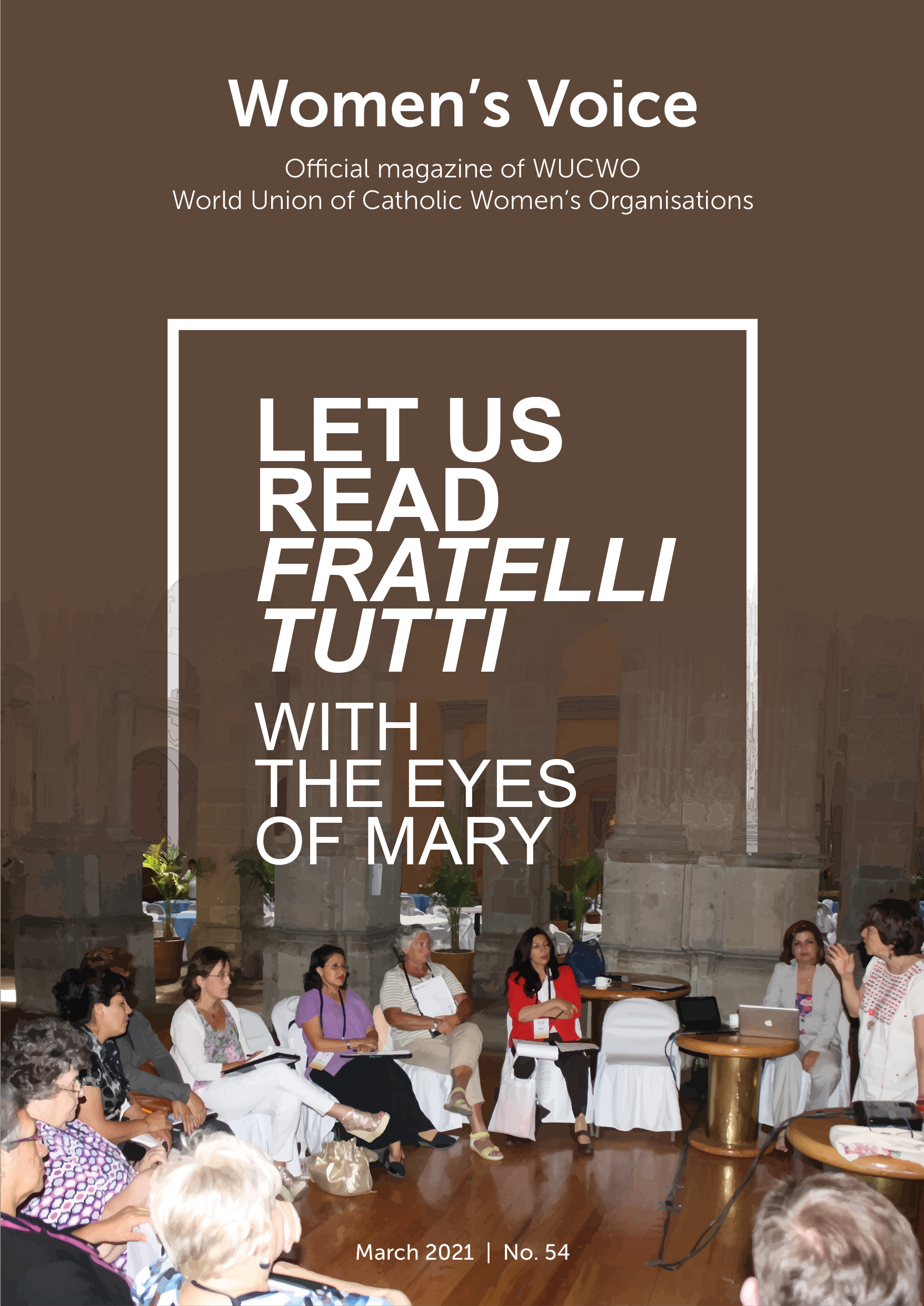