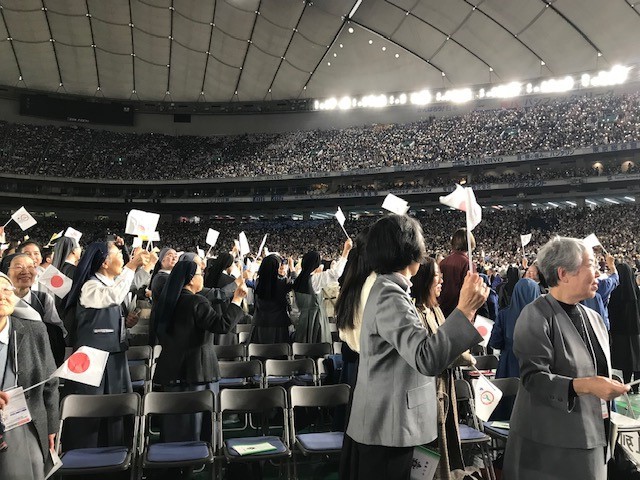 Below you can find the report of Kunie Fukahori, President of the National Catholic Women’s Organization of Japan, on the visit of the Pope to Japan.

«Pope Francis visited Japan in November 2019. Japanese Roman Catholics number some 441,000 and represent only 0.34% of Japan’s population. We Catholics were very excited about the Pope’s visit, of course, but the general public also expressed great interest in this first visit by a Pope in 38 years.

Pope Francis first visited both Nagasaki and Hiroshima – sites of the atomic bombings of 1945. The Holy Father’s prayers prefaced the message of World Peace Day, January 1st, 2020: “There is no peace through nuclear deterrence”.

On November 24th the churches of western Japan held a great mass led by Pope Francis in a baseball stadium in Nagasaki. He brought a message of peace and spoke out against the evils of nuclear weapons. He encouraged all people to seek ways to eliminate such weapons and the threat that they pose.

In Tokyo (eastern Japan) people gathered from all over the country to welcome the Pope and hear the mass which he led. Among the 55,000 in attendance were many foreign residents, Eastern Orthodox clergy, Buddhists, Muslims, and citizens of Tokyo.

Translations were projected on large screens. Music was performed by music groups of various Catholic schools and choirs made up of members from many nations. Every religious order and convent was present in Nagasaki and Tokyo, with banners welcoming Pope Francis.

These scenes and languages created a beautiful harmony of diversity like “a heaven realized on earth.”

The theme selected by the bishop’s conference of Japan was “Protect all Lives”. The Pope focused his message on this idea and emphasized “peace, respect to each and every person, and co-existence embraced by compassion,” so that no one is left behind, ignored, or marginalized by society because of the pursuit of self-interest and competition.

He encouraged us to be companions of those who have lost a sense of belonging, and to create an interactive society. He prayed for us to become workers in building the Kingdom of God.

In the past 10 years Japan has suffered from the Great East Japan Earthquake/Tsunami, other major earthquakes, massive floods, and destructive typhoons. Many within the Church were seriously affected by these disasters, yet went out as volunteers to help other victims with money, supplies, and other methods of support.

The nuclear power plant damage in Fukushima was one of the most serious disasters whereupon the Japanese Bishops Conference announced their advocacy of eliminating nuclear power. One of our member associations offers a program for Fukushima residents who had to relocate to other areas because of radiation concerns. The program invites those who had to move and children who have not been allowed to play outdoors to unaffected areas where they can have opportunities to relax and enjoy the outdoors again.

On November 25th in Tokyo, the Pope met disaster survivors and their supporters before the mass held in Tokyo Dome. Among them were members of the CWL Japan living in affected areas, such as Sendai and Ibaraki, who worked closely with and for other victims through collaboration with members in unaffected areas.

The Pope especially encouraged listening directly to what the survivors went through and witnessed. Three people spoke as witnesses. After listening to their experiences of hardship and grief, the Pope prayed in silence. Pope Francis talked to those gathered near him saying “We are also a part of the planet of Earth, and a part of the earth’s environment. We need to make courageous decisions regarding our future energy sources. One of the evils that has a strong influence is ‘The Culture of Indifference’. When one of family member is in pain, the entire family is in pain. We must unite.”

The Pope blessed the survivors and attendees and was then seen off with a special song composed to encourage those working towards recovery after the earthquake and tsunami. It was a great day of thanksgiving for those gathered together with the Holy Father.

Francis also shared time with young people and told them “the world needs you.” He asked them to always ask themselves “not ‘why do you live’, but ‘for whom do you live’, and ‘with whom do you share your life’.”

In the Tokyo mass he said “Telling a gospel of life means we become a field hospital, ready to heal wounds and offer always a path of reconciliation and forgiveness.” Everyone who attended was filled with excitement and a great, deep joy reminiscent of the disciples on the way to Emmaus: "Were not our hearts burning within us while he talked with us on the road and opened the scriptures to us?"

In all cathedrals and many churches throughout Japan that day, large screens were set up for public viewing. Many people who could not travel to the Pope’s masses gathered in their churches to watch the broadcast and participate in the masses.»

The Pope met the Tsunami survivors and supporters. The one with the blue scarf is Masako Abe, the vice-president of CWLJapan. 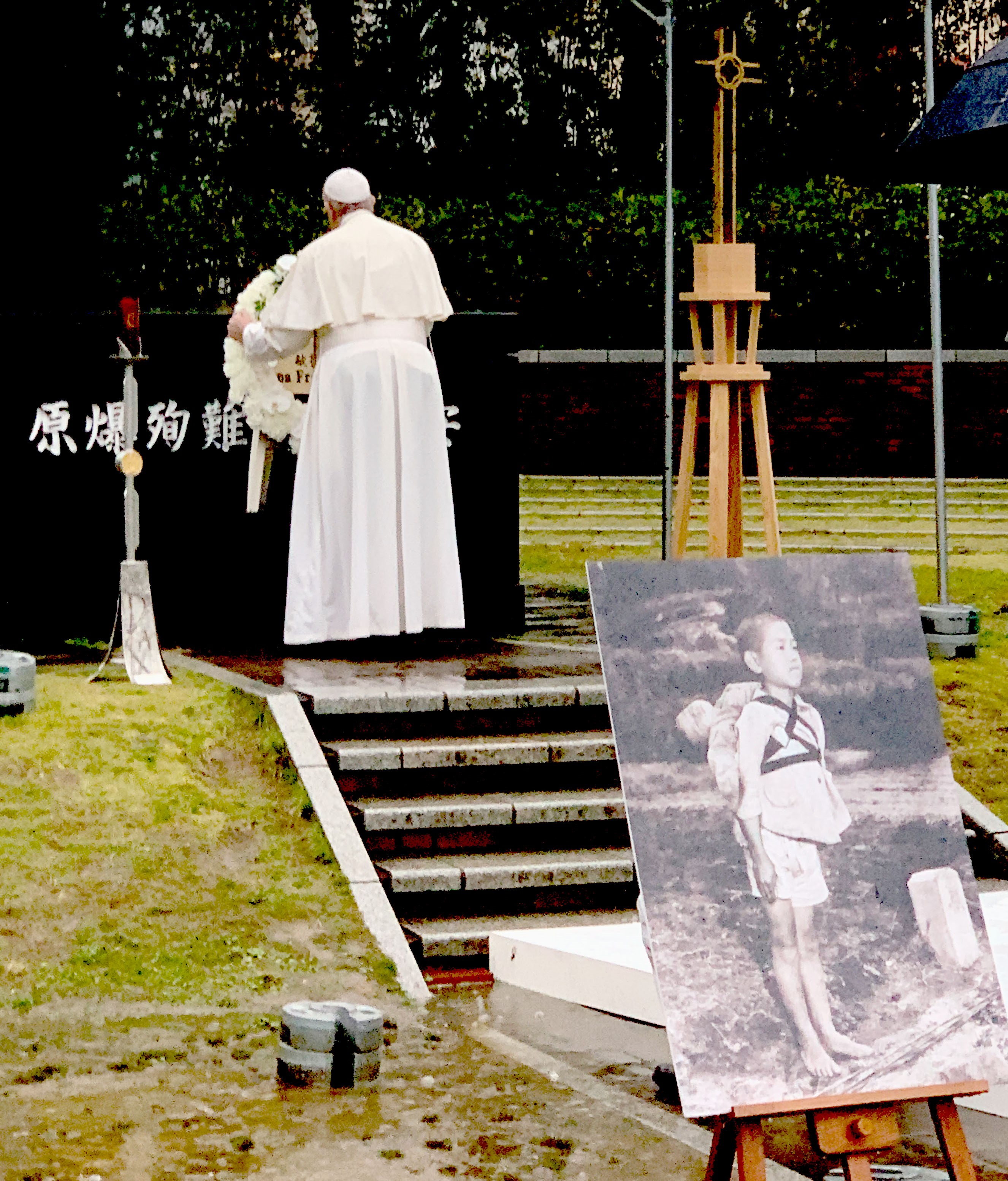 The Pope offered flowers at the Ground Zero to a black marble vault containing the names of the atomic bomb victims and survivors who died in subsequent years. 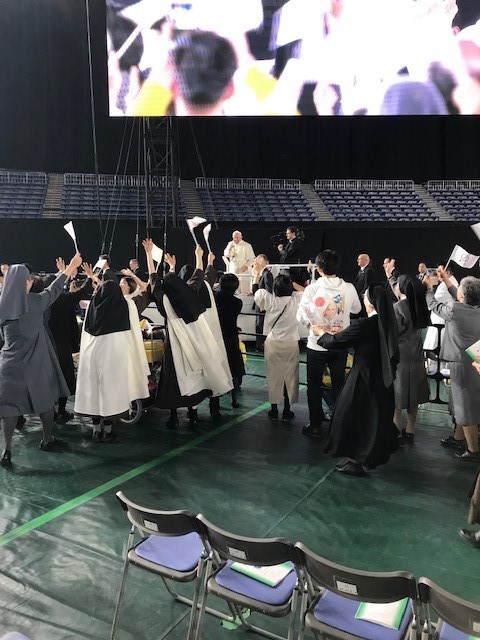 About 55,000 people gathered for the Pope’s mass in Tokyo.