* Towards a new evangelization of the international political life

We are living in a particularly important moment for the Church, a time marked by the need for a “new evangelization” ad intra and ad extra. Even though some claim that the term “new evangelization” eeds further clarification, it is clear enough that the world needs a new, fresh way of thinking: a credible, oherent witness on the part of Christians. We hand on what we believe (i.e., evangelization ad extra), and the intensity of our belief demonstrates, in one way or another, the authenticity of our Christian lives (i.e., evangelization ad extra). To give impetus to these two dimensions, the Holy Father has chosen to dedicate the next Synod of Bishops – to take place in October of 2012 – to a reflection on the intensity with which the People of God live and proclaim their faith.

To prepare for the Synod, a few areas where the New Evangelization is particularly urgent have been identified. One area that perhaps has not been explicit but which nevertheless is in need of a re-vangelization is the area of international politics. In an era marked by strong globalization, international and inter-governmental organizations and the international agencies connected with them play an important role in delineating the cultural and intellectual (not to mention the non-intellectual and non-cultural) elements that characterize national politics. It is at this level, where the principle reference points of international law and a global mentality are “manufactured,” that Christians are called to offer a genuine contribution to professional life and thinking. In fact, contrary to popular belief, Christians, though often in a minority, are called to act as a leaven in these contexts, effecting a fermentation that will transform society (cf. Lk 13:21). They are so in an integral way within various sociopolitical structures including their association with Non-Governmental Organizations (NGO).

Over the last several years, the scope of influence of NGO’s in the international arena has expanded considerably. They were conceived precisely as a means of bringing the voice and experience of local realities to bear on international organizations. They are considered representative of the so-called civil society.

Catholic-inspired NGOs, which have a consultative role in international organizations and agencies, have the privileged opportunity to witness – with their concrete proposals – to Christian values. The question is how to bring to those spheres, in an effective and attractive way, the entire work of the Church in its concrete service to mankind. Is it possible to contribute to the “New Evangelization” at this level? If so, how? Are we sufficiently aware of our responsibility?

The end that ultimately characterizes the work of the Forum of Catholic-inspired NGOs is to re-evangelize international politics. Catholics who participate in the Forum engage in a reflection on the challenges we face and on the ways the message of the Gospel can be incorporated into their actions.

The first question that arises pertains to the “evangelizing” dimension of our work; this dimension sometimes can be obscured by projects of development and human improvement that are limited to a purely “horizontal” view of life.

Catholic-inspired NGOs must remind forums of international governance of the ethical principles that animate their initiatives at the service of man in his entirety within various social spheres. The participation and collaboration of NGO representatives, carried out with intelligent and balanced proposals, is most welcome in international arenas even when their thought and teaching is not always incorporated into official documents.

The witness they offer is necessary nonetheless so that the voice of Catholics is heard and kept alive. By identifying themselves as Catholic or of Catholic inspiration, NGOs benefit from the moral credibility of the Holy See in the international arena and are therefore considered to benefit from a solid formation in the principles of Catholic social teaching without allowing themselves to be swayed by political positions detrimental to international sphere. We can think of the erroneous political stances of a purely “horizontal” orientation that compromise or undervalue the Church’s activities for the good of all people. The fields upon which Christians, and hence Catholic-inspired NGOs, carry out their activities is wide and varied, including cooperation for development, rural life, education, health, and social communication. All of these have the human being as a common denominator: the person in his relationship with the world. Thus they are concerned with human rights, humanitarian law, young people, family life, and the issues of immigration, refugees, and labor. They work as mediators to resolve conflicts and to promote peace.

At the political level, they organize campaigns to raise public awareness, to promote formation, and to advocate for causes of special concern; they participate in international debates to promote the common good and arguments in favor of marriage, family, and life. In short, they work for integral human development. On the international stage of debates with other NGOs or institutions of other religious confessions, Catholic-inspired NGOs collaborate in promoting the common good and respect for human dignity. They are convinced that the Gospel and the Church’s proposals, especially concerning social issues, are intrinsically connected to the Good News, and they openly admit this with due respect for the views of others. The missionary nature of the Gospel and a re-emphasis of the God-question, necessarily entail giving priority to the human person in political, economic, and social decision-making in a world where the logic of the market and of profit, national and local interests, and financial speculation seem to have overstepped their bounds.

The commitment of Christians to solidarity – or better to charity understood in the light of its deeper meaning as a service of charity (cf. Deus Caritas Est, 25) – opens up a broad spectrum of concern that ranges from the care of the poorest of the poor in order to overcome an unequal distribution of wealth and to promote attitudes of generosity and hope, to the promotion through formation of a greater awareness that evangelization is based on listening, goodwill, a respect for persons, an integrity of witness, an openness toward others, freedom, and the truth, all beginning with the imitation of Christ. Christians involved in mass media also have something to say in building a culture of peace and in proposing positive models of journalism to younger generation that genuinely express their hopes and aspirations for a better world.

Finally, the primary way in which Christians participate in the new evangelization ad intra is through a formation that involves the entire human person. Education is considered a means of raising the poor out of poverty. We must be careful, however, not to fall into the temptation of communicating the truth in an abstract or merely intellectual way, or of engaging in concrete actions that are not aimed at a genuine promotion of the human person. There is an urgent need to strengthen the “informal” education of young people, especially of young women, placing the person at the center in order to affect a process of familial and social transformation. Collaborating to meet the challenges of educating young people, with the youth themselves as the protagonists and through an education system that elicits a true journey of faith, is a central priority of alternative education based on Gospel values that connect directly to contemporary culture.

All of this reveals the urgency of formation in general – personal and communal – so that there will be a greater consistency between belief and action: a spiritual formation that leads to a deeper personal experience of God and a greater awareness of the responsibility which that experience entails in the social context.

Another area in which we need to invest is the formation of teaching the Church’s social doctrine. A high percentage of those involved in or tied to NGOs – even though they are intrinsically placed at the service of the new evangelization – is not sufficiently knowledgeable of the Church’s social teaching. Above all, this shows the need to offer formation programs to those engaged in public service: programs with a community-centered base and with an outlook of Christian discipleship with due regard for the contemporary context in which they are immersed and which they are called to transform. 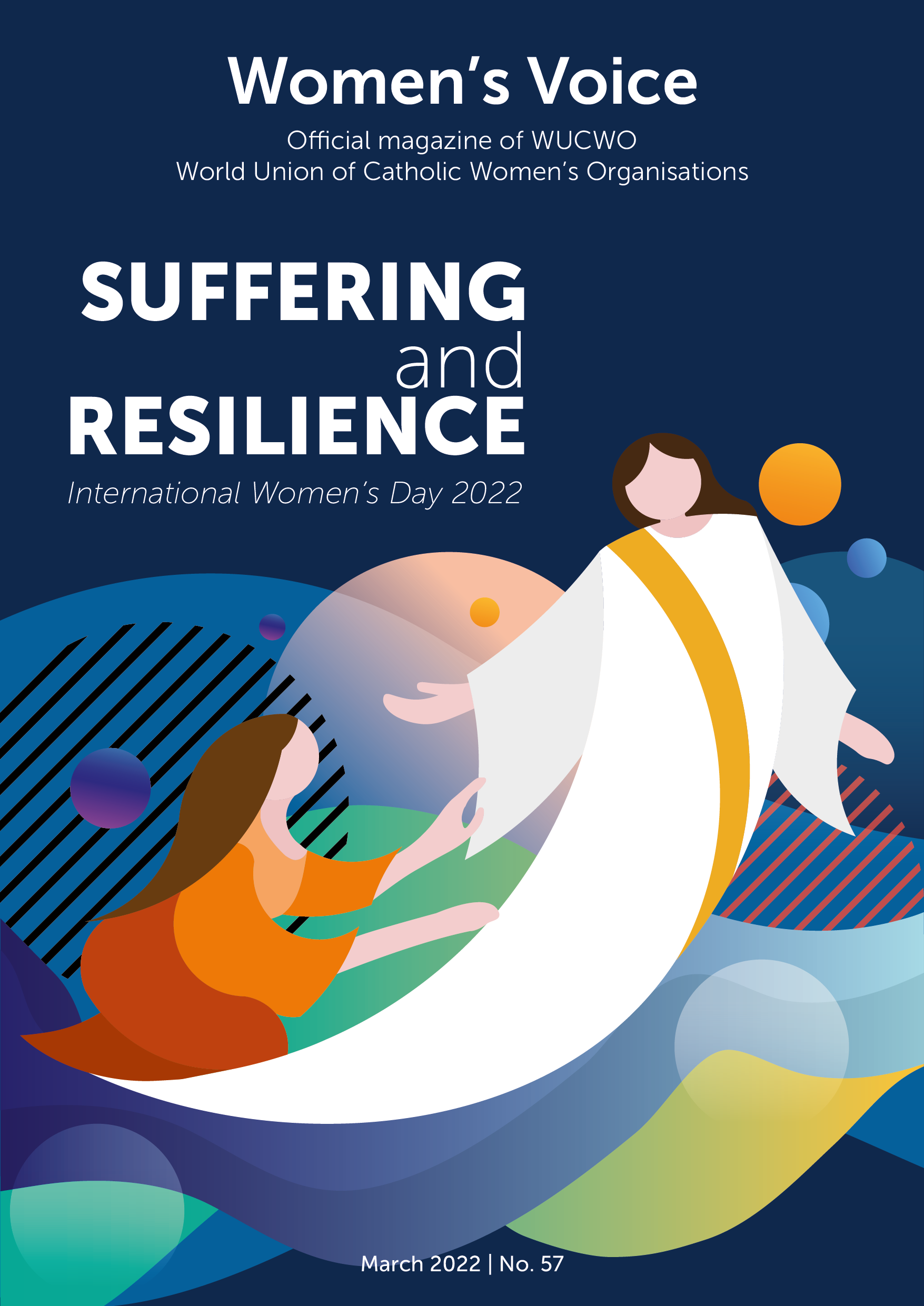 Voices from our Member Organisations which are testimony to the commitment of WUCWO´s members on the theme: "Suffering and Resilience - International Women's Day 2022".